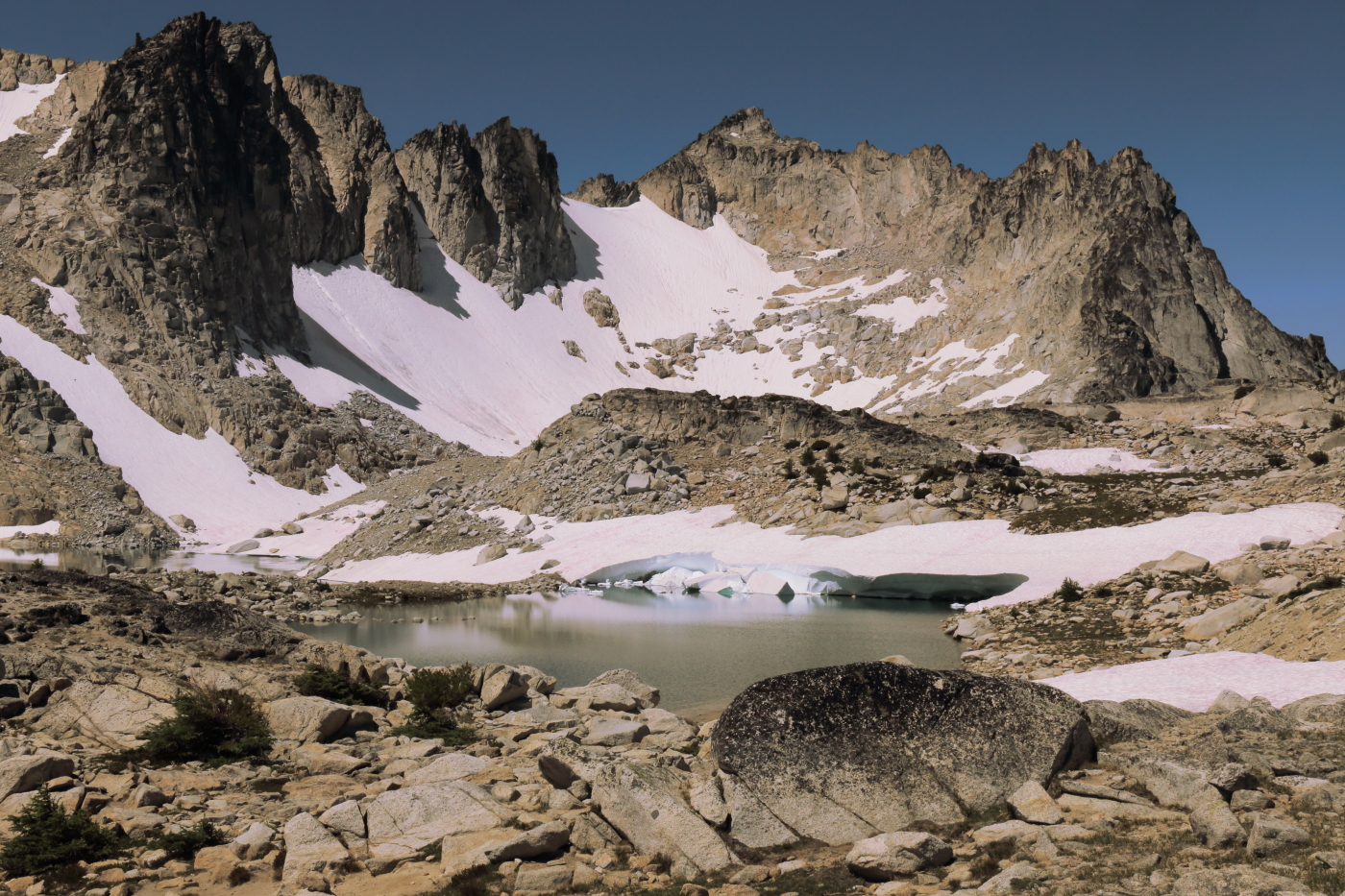 The Enchantments is a beautiful alpine wilderness near the town of Leavenworth, in northern Washington. It features amazing lakes, granite peaks, and beautiful alpine meadows.   The area is so popular that permits for camping in the Enchantments have become highly sought after and are difficult to obtain.  The forest service this year issued about 800 permits by lottery, despite having some 28,000 applications for permits!

A long 18-mile trail makes a complete pass through the Enchantments.  Thru-hiking the full 18 miles in a day has become a popular, albeit fairly grueling, alternative for those who aren’t lucky enough to get permits.  In mid-July, 2018, four friends and I completed the thru-hike, and despite the difficulty associated with this hike, we all loved this trail.  I would actually qualify this as one of my all-time favorite trails.  Its amazing.

We started early, first dropping off a car at the Snow Lakes Trailhead, and setting out from the Stuart Lake Trailhead around 6 am.   We spent a couple hours hiking through forest, before reaching Colchuck Lake and the towering Dragontail Peak.  From the lake we got our first views of Aasgard Pass, a long and steep climb leading up to the Core Enchantments Zone.

Aasgard Pass climbs some 1,900 feet in less than a mile, and is commonly regarded as the toughest section of the trail.  The climb was steep for sure, but we took it slow and had it done in a couple hours.  There was a small amount of route finding in places, but loose trails and cairns were usually around to guide the way.  We also saw a quite adorable baby mountain goat.  So cute.

Aasgard Pass tops out at around 7,800 feet, and opens into the Core Enchantments Zone, arguably the pretties part of the trail.  The first section is the highest section of the Enchantments and is nearly all granite, ice and water.  It looked like the moon.

We broke here for a quick lunch and water refill.  We still had a long way to go though, so by noon we were moving again.

From here, the trail descends through a long series of beautiful alpine lakes, pristine meadows and clumps of twisted pines that makes up the Core Enchantments Zone.  This was by far the best part of the hike, and it lasted most of the afternoon for us.  Every turn was like walking into a new wonderland.  It was so pretty.

Enchanted Lake was my particular favorite lake, (although all the lakes were beautiful).  Parts of it felt like you were walking through a fairy tale, with tiny little wavy trees, a waterfall, and rocky islands.

The peaks surrounding the Core Zone are excellent and provide an added layer of drama to the whole place.  Prusik Peak seemed to be everyone’s favorite, but Enchanted Peak, Little Annapurna, and McClellan Peak were all great.

We ran into our first mountain goat on Aasgard Pass, and everyone immediately started taking pictures.  Little did we know how many pictures of goats we would get later that day.  The Core Zone is full of goats.  Few of the goats are timid, and one even followed me into the trees when I had to pee.  Best to leave the goats alone, of course, but don’t worry, everyone is going to have 50+ pictures of goats by the end of the day.

Around 4 pm we reached the eastern end of the Core Zone, marked by our first of many long descents down to our second car.  This first descent dropped around 1,400 feet to Snow Lakes, from which we’d still have another six miles back to the trailhead, and and additional 4,000 feet of descending.  It was going to be a long evening.

At the far end of Upper Snow Lake the trail follows along the top of spillway before continuing on.  Easy to miss, but refreshing on the feet if you don’t mind getting them wet.

The trail continued along the length of the canyon here, trading off between a flat forested trail and long switchbacks, usually down slide areas.   This section was slightly brutal, especially after a long day, and switchbacks felt pretty nasty toward the end.  We eventually made it back to the car around 9:30 pm, and still had another hour of coordination to pick up the first car, so we were all zonked by the end of the day.  Still worth it.

Overall this was an amazing hike.  The distance was long and the elevation changes were grueling, but we had a good team and everyone had an excellent time.

The Enchantments are an incredibly beautiful place.  I highly recommend this hike if you’re up for the challenge.  It is well worth the effort.

More information about the Enchantments thru-hike can be found on the Washington Trails Association (WTA) link below:

We relied heavily on the trip reports posted to the WTA page, by the way, so thank you to all the WTA users who left detailed reports.  You guys rock!

The Enchantments are managed by the Okanogan-Wenatchee National Forest.  Official information, including permits and regulations information, can be found at the link below: