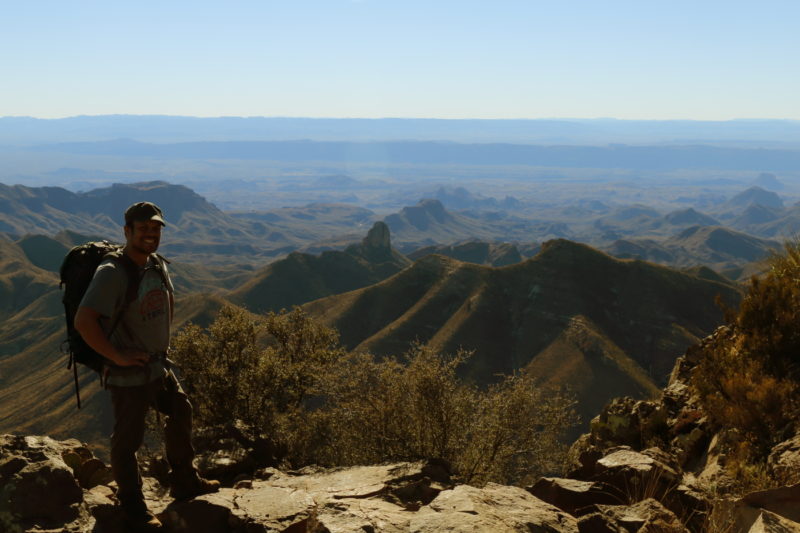 Deborah and I traveled into Big Bend National Park in January, spending a day hiking the South Rim Loop out of the Chisos Basin.  This hike did a long circuit through the Chisos Mountains, a small, but prominent mountain range in the middle of the park.  The trail was long, and took us a full afternoon, but it passed through many different parts of the Chisos Mountains, and had some awesome overlooks above the Chihuahuan desert.

Deborah and I started off late in the morning, driving in from our campsite outside the park.  We took a leisurely breakfast in the parking lot at the Chisos Mountain Lodge, before gearing up.  From there, we took the Pinnacle Trail up into the hills, with some impressive spires to look at along the way.

The Pinnacles Trail climbed up to a saddle near Emory Peak.  There are a few switchbacks on the way up, and was probably the steepest part of our day.  The trail climbed through some nice pinnacles though, and there were great views of the Chisos Basin at the top.

From the saddle, we took the Boot Canyon Trail out to the South Rim.  The Boot Canyon section was a two-hour hike with a gradual climb through an oak forest.  We hiked past a long series of springs, and eventually into grassy oak savannas near the top.

At the far end of Boot Canyon, the trail opens out to awesome overlook over the Chihuahuan Desert.  The southern border is just beyond here, and we could see way into Mexico from our perch.  Definitely a trail highlight!

We took the Laguna Meadows Trail back to the trailhead, letting us see the western parts of the Chisos on our return trip.  We had nice views above Boot Canyon through here, plus wide vistas over the desert to the west of the park.

Deborah and I came into Chisos Basin late in the day, making our way down long sections of switchbacks back to the lodge.  We were tired by the time we got back to the van, and it felt good to pull the boots off after a long afternoon on the trail.  Overall, this was a great hike, and Deborah and I both loved it.

We stopped into Big Bend during the government shutdown in January 2019.  The park was in partial operation while at the time, i.e. most of the federal staff were under furlough, but some of the vendors were still working.   All the visitor centers were closed, and the Park Service shut down all camping in the park, including backcountry camping.  The only overnight stays allowed were at the lodge in the Chisos Basis and an RV park in Rio Grande Village, (both operated by private concessionaires).  Deborah and I stayed just outside the park, camping on the side of the road in the van.

Some of the law law enforcement staff were working however, all of whom were working without pay through the shutdown, (they’d receive backpay, after the government reopened).  We saw some border patrol, and one ranger, doing rounds in the park.  We also talked to a few people that were ticketed for camping overnight in the park, (the Park Service had tons of no camping signs out).  The shutdown was not a major problem for us, as we could still see most of the park.  We both enjoy checking out visitor centers however, so we were bummed those were closed.  Otherwise, it wasn’t too prohibitive.

General information and trail information for the Chisos Mountains area is available on the Big Ben National Park Website: