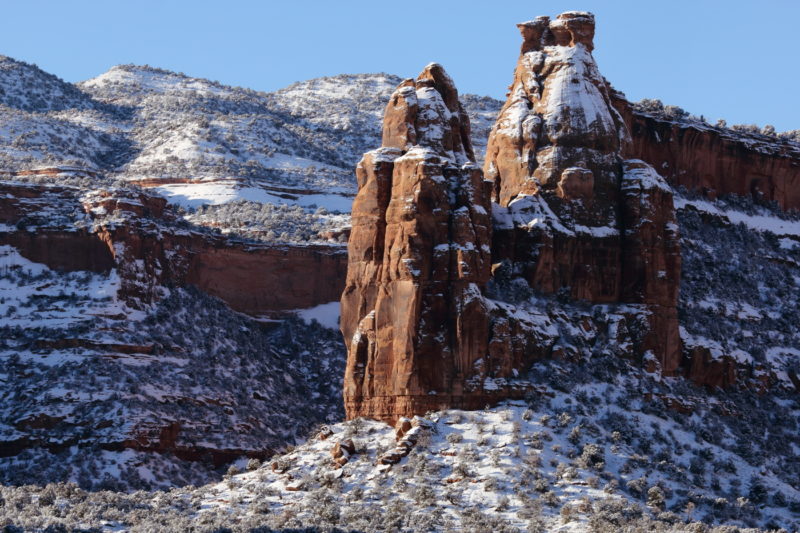 I hiked a nice trail through Colorado National Monument last week.  The Monument Canyon Trail does a pretty tour though one of the park’s most popular canyon, passing next to many big red rock towers.  The first snow of the season fell here just a day earlier as well, so everything was under a fresh blanket of white.  I had a nice crisp morning on the trail, and it was a good hike.

I was up early Tuesday morning, with cold temps and fog.  It was hard to motivate in a half frozen van, but there was fresh snow outside, and I was looking forward my first real winter hike of the year.  After a little coffee, the fog began to burn off, and I was all warmed up for a trail-walk.  Yay, for snow!

I kicked off my morning by parking at the wrong trailhead.  It turned out ok, but I had to follow a use trail through a break in the boundary fence, before I figured out where I was.  This also put me onto the Wedding Canyon Trail, an alternate route up a side canyon.  This was fine, however, as it would connect up with the Monument Canyon Trail later on.

After a short climb, I was getting nice views of the monuments in the canyon, including Independence Monument and the Pipe Organ.  Everything was dusted in snow and frost, and I was feeling better about pushing through the chilly morning.

Independence Monument was a beautiful formation right in the middle of the canyon.  The trail skirted the base of this rock and it was cool to see it up close.  It’s definitely an impressive rock.

I hiked a couple more miles back to a nice view the Coke Ovens.  From here, the trail climbed high to the scenic road that runs through the park.  I had plans to head out to Moab later, however, so I made this spot my turnaround point, taking a break to eat a sandwich, before making my way back to the van.

On the way back, I had nice views of all the monuments with snow melted off their southern faces.  The view of Kissing Couple was very good from here, and really looked like like two figures kissing.  I could also see at least one bonafide arch on this tower, and wondered if there were more among the pillars at the top.

I also had nice views of the Pipe Organ, with most of this snow on its southern face melted off in the sun.

Window Rock was the same story, with exposed rock on its southern face.  You can visit the top of Window Rock from the scenic road as well, near Saddlehorn Campground.  There is even a view looking down through the window.

By 2:00 PM I was making my way back down Wedding Canyon, returning to my van by 3:00 PM.  From here, I was off to Moab, for a few days in Arches and Canyonlands.  This was a nice trail though, and I’m glad I had a chance to see the Colorado National Monument while I was in the area.

I was in Grand Junction for the week to reup on provisions, and wait out some weather.  Sadly, this town was not exactly a trip highlight.  I camped near the airport, which worked ok, but turned out to be a popular area for 4-wheeling as well… at 3 AM in the morning!  I spent another morning filing a police report, after watching a homeless man beat up his girlfriend in an alley.  Yay, shitty people!!

The plus-side of Grand Junction however, was nice access to Colorado National Monument.  This particular trail is probably the most popular hike in the park, with iconic views of the canyons, and a good general representation of the park.  I really enjoyed getting into deeper parts of the monument on this trail, and liked getting up close to big rock towers.   Plus, it was a treat hiking through some snow again.  Overall, this was a good trail and I enjoyed it a lot.