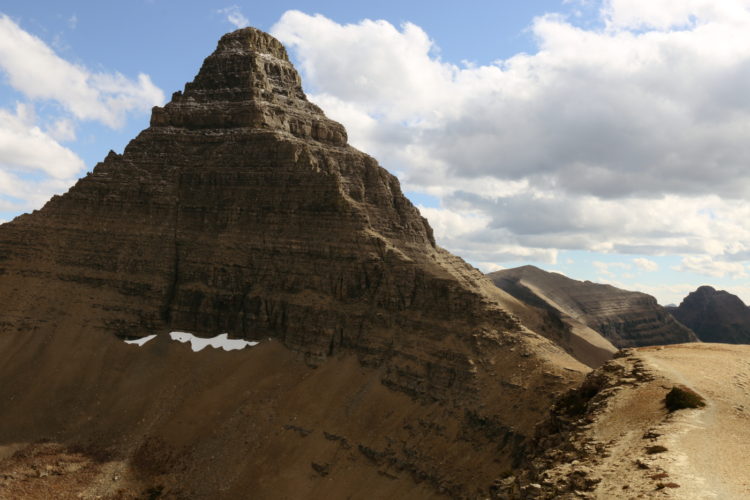 I drove out to Two Medicine area early Friday morning.  Geared up in the North Shore Trailhead parking lot, ate a bagel, drank cold coffee, and hit the trail at 8:20 AM.  At the trail marker a few minutes in, I hung a right to Pitamakan Pass.

It was foggy that morning, and I was socked in for a good hour and a half, until the fog eventually began to break up. Once it burned off however, I got amazing views of the Dry Fork valley.  What a gorgeous place!

Flinsch Peak and Mount Morgan dominated the view to the west as I climbed out of the trees, but the whole valley was beautiful.  This part of the trail was prime bear territory though, and an active grizzly and cub were reported to be in the area.  I never saw bears, but I was happy to have bear spray with me just in case.

To some extent, Flinsch Peak is like a centerpiece on this hike.  The trail climbs high up behind the back face of this peak, before descending down into the Two Medicine Lake basin and wrapping around to the beginning.  As such, hikers get amazing views on every face of this peak. The long mass of rock that extends into the Dry Fork valley is a particularly photo-worthy formation, sitting like a fortress while the Flinsch pyramid sits perched above.

The trail goes all the way up to Old Man Lake, which sits at the foot of Flinsch’s north face, before climbing steeply up to Pitamakan Pass on Mount Morgan.  I took a short break here, munching an apple and taking in the view, before getting back on my feet.  I was back on the trail by 12:35 PM.

Shortly up the trail, a pair of hikers pointed out a small group of bighorn sheep grazing on the hillside.  These sheep blend in well among the rocks, but we counted five in the same spot.  Even with zoom lens, it hard to see all of them.

Climbing higher up to the pass, I got excellent views of Rising Wolf Mountain, including the light dusting of snow from the night before.  I also think the face of Bill Clinton may live on the side of this mountain.

Climbing higher still, I got great views of Old Man Lake far below Flinsch Peak, with stray bits of sun lighting up the fall colors in the surrounding trees.  This hike was turning out to be alright.

The trail to the ridge was not too bad, climbing a steady grade, over a few long switchbacks.  It was a climb, but not excessively difficult, and I was at the top in about an hour and a half, including lots of picture breaks.

From the pass, I could now see down into the Pitamakan valley, and Pitamakan Lake.

To the west, above Pitamakan Lake, sat a second unnamed lake, below a massive wall of rock along the Continental Divide.  Just north of here was the Triple Divide, a point where the Pacific, Gulf and Hudson Bay drainages meet.

The trail continued west along the ridge, crossing over the Continental Divide and wrapping around the backside of Mount Morgan.

Wrapping around the western face of Mount Morgan along the trail, I could now see into the Pacific side of the Continental Divide, and many new views, including Tinkham Mountain, Mount Stimson and the Pumpelly Glacier.

The Pumpelly Glacier, one of the few glaciers to remain after the massive ice sheets receeded 12,000 years ago, sat high up on the mountain, looking lovely.

I had excellent views of the regal Mount Stimson as well.

The trail continued on to the south, contouring across the western face of Flinsch Peak, and on down to Dawson Pass beyond.

Around 5:15 I came into Dawson Pass, with great views up the Nyack Creek valley.  I could see many more peaks this direction including Mount Helen, Lone Walker Mountain, Caper Peak, Battlement Mountain, and Mount Saint Nicholas.

From Dawson Pass I had great views into the Two Medicine Valley.  Here the Pumpelly Pillar, a long wall of rock extending out from eastern shoulder of Mount Helen, commands over the valley below.

It was late in the day now, and I had only a few more hours of daylight and some 6 or 7 more miles still to go.  The trail descended steeply from here, switchbacking down a set of cliffs and into the trees.  About a mile and a half from the pass, I came into the No Name Lake, at the foot of the Pumpelly Pillar wall.  I stopped for a quick break, noting some fresh scat from what looked like elk.  I was treed in heavily here, so I resumed with noisy hiking again, trying to scare off any animals potentially nearby. Soon enough, I startled a moose and her calf grazing along the trail.  The cow watched me carefully, as I cautiously bushwhacked around them, bear spray in hand in case she charged.

Two minutes later, I came across the bull.  The interaction here was the same: he stood by on trail, watching me carefully, as I cautiously bushwhacked my way around him.  He grunted a few times at me, but we parted ways without much more.  I was happy to pass these beautiful creatures without incident. 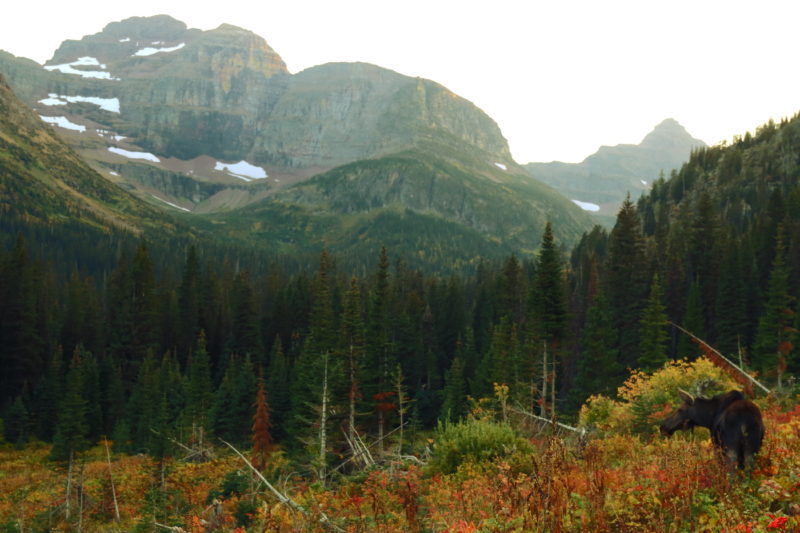 I ran into one last moose, 15 minutes later, this one off the trail in a meadow.  I could hear more bugles from other moose in the trees beyond. It was dinner time, and they were packing in foliage for the night.

I continued on, and was happy to be overtaken by another hiker, probably the last hiker hiking out that night.  He’d left at 12:30 that afternoon, and was a fast hiker.  We’d both been spooked by the moose, so we hiked the last few miles of trail together, talking to scare off any other animals.  We hiked the last hour and a half by headlamp, returning to the trailhead at 9:00 PM.  I also saw two foxes on the road on my way back to camp.

This hike, while long and strenuous, was still probably my favorite hike in Glacier National Park.  The route is long, traversing 2 mountain passes and 3 separate watersheds, so hikers are treated a long procession of amazing views.  The section between Pitamakan and Dawson passes was particularly good, with spectacular views into the more remote parts of the park.  Thru-hiking the full 18 mile trek is manageable for most outgoing hikers, but this trail can also be done as an overnight backpack with a backcountry camping permit.

The National Park Service has lots of useful information for Glacier National Park on their website, including camping, fees, permits and regulations.