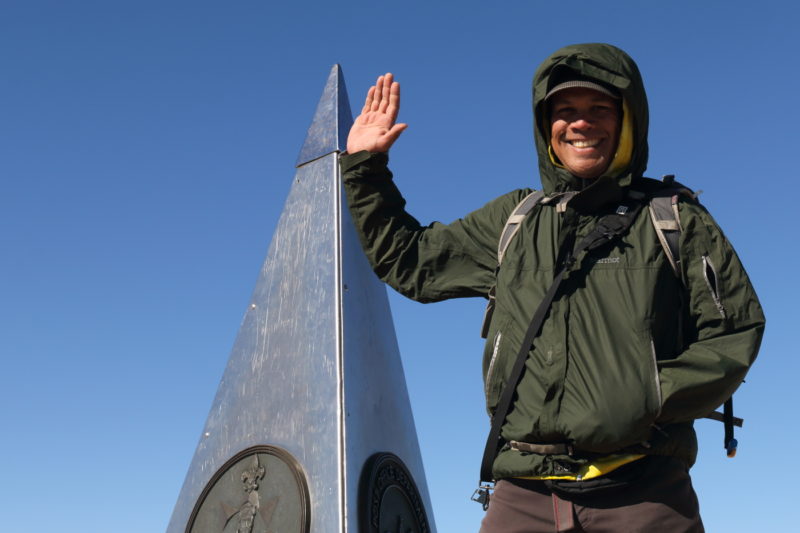 We managed to fit a trip in to Guadalupe National Park last month, hiking to the top of Guadalupe Peak, a beautiful mountain and the highest point in Texas.  Deborah and I had initially passed on Guadalupe, as it was a little out of the way for us, but after seeing this prominence rising out of the desert north of Van Horn, its banded cliffs beckoning us like a flag in the distance, we made a snap decision one morning to go climb it.  We knocked this one out in an afternoon, powering through nine and a half miles and three thousand feet of gain in about five hours.  It was a great climb overall, with spectacular views, even with a little wind at the top.   Guadalupe Peak is awesome.

The park road to the trailhead was closed that week, as the government was still shut down, so we had to leave the van at the Butterfield Stage Trailhead out on the highway, and hike an extra mile in to the Guadalupe Peak Trailhead.  This was ok however, as this took us down a short nature trail with interpretive signs describing the desert flora, plus the ruins of the old Butterfield Stagecoach station.

Once on the Guadalupe Peak Trail proper, the climbing started in earnest, ascending some 1,000 feet over a series of switchbacks up the eastern face of the mountain.  Deborah and I love a good climb though, and soon we were in the zone, steadily working our way up toward the ridge.

The trail passes through some cliffs at the top of the switchbacks, parts of which were blasted out of the rock with dynamite.  Despite the steepness of the climb, the views here were great, with an excellent vantage on Hunter Peak across the valley.

Above the switchbacks, the trail transitioned to a loose trace of the ridge, climbing another 2,000 feet over the next two and a half miles to the summit.  The wind also began blowing hard here, so we layered up with jackets, hats and gloves to keep warm.  Despite the chilly wind, there were some lovely pockets of pine forest and oak savanna up here, ecosystems that normally wouldn’t exist in the desert, but leverage the rain and cooler temperatures in the mountains for survival.  So cool!

This trail climbs high, and is a calf-burning workout for sure, but the views are spectacular the top.  Along the last half mile, the massive formation known as El Capitan dominates the southern view, with the sprawling West Texas desert falling off in the distance.  So pretty!

We made good time, reaching the summit in just over two hours.  It was really windy at the top, almost hard to walk or even stand in.  We were happy to have plenty of layers with us as well, as the icy January wind cut straight to the bone.  We stayed just long enough to eat a sandwich and take some pics, before heading back down to milder weather.

Guadalupe Peak was a great hike, and if you’re up for the climb, it is worth the time.  The views at the top were excellent, and it was cool checking off the highest point in Texas from our summit lists.  The climb was significant, but manageable at least for us, (in fact we enjoyed the workout).  Most hikers in good health could manage this trail fine though.  Given that, we were there in January and aside from the wind, we had sunny weather with temperatures around the 60’s.  I imagine this trail is a different story in the summer, when the heat is oppressive.  Hikers should definitely check the forecast, carry water and otherwise prepare accordingly.  Aside from that, we loved Guadalupe Peak, and would recommend it for sure.