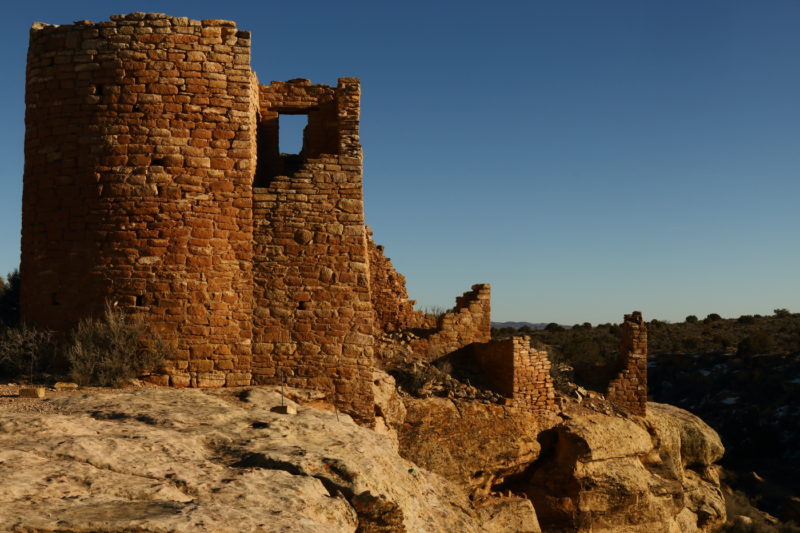 I spent a night in Hovenweep National Monument last January, checking out the amazing ancenstral Puebloan ruins there.  This place was fascinating, with intricately built stone towers, some over 700 years old.  We’re still discovering  who built this village, and how these building were used, but the craftsmanship suggests a highly sophisticated society.  Still, many questions remain.  All this aside, Hovenweep was an excellent place to visit.

There are actually six different villages within the Hovenweep, but the most accessible is Square Tower Group.  The Square Tower village has the most buildings, and lots for visitors to see and do, including the main visitor centor and campground.  It is also the only village with completely paved roads all the way in, (the other villages all require 4-while drive).   I explored the Square Tower Loop Trail while I was there, which circles through the entire collection of buildings.

The Square Tower Group sits at the edge of Little Ruin Canyon.  The builders collected water from springs that seeped out of the canyon walls, and subsisted on corn that they grew around the outskirts of the village.  If fact, they built a whole system of water control structures to irrigate the arid land around the canyon.

The Square Tower Loop was an excellent interpretive trail.  Visitors aren’t allowed to touch or go inside any of the buildings, but they can walk close to many of them, and see all the details of how they were made.  Hovenweep has some of the best ruins in the region, and are very much worth the trip.

I stayed in the Hovenweep campground while I was there, located near the Square Tower village.  The campground was simple, with shade structures and picnic tables at each site, and vault toilets that were shared across the campground.  Overnight stays were cheap at $15 a night, and the first-come-first-serve sites were easy to get in the off-season, (in fact, I was the only one there during my visit in January).

Hovenweep also has five other ruins sites located nearby.  I wanted to check these out too, but they required 4-wheel drive to get there, so I ended up settling for the Square Tower Group only.  The Square Tower Group had excellent ruins though, and it was the village that everyone one should see first, so I was satisfied with that.  The Visitor Center was also close by, with visitor information and other services.  If I had had more days in the area, I would have set aside time to see the other sites.  Still, Hovenweep was a great stop, and I recommend.