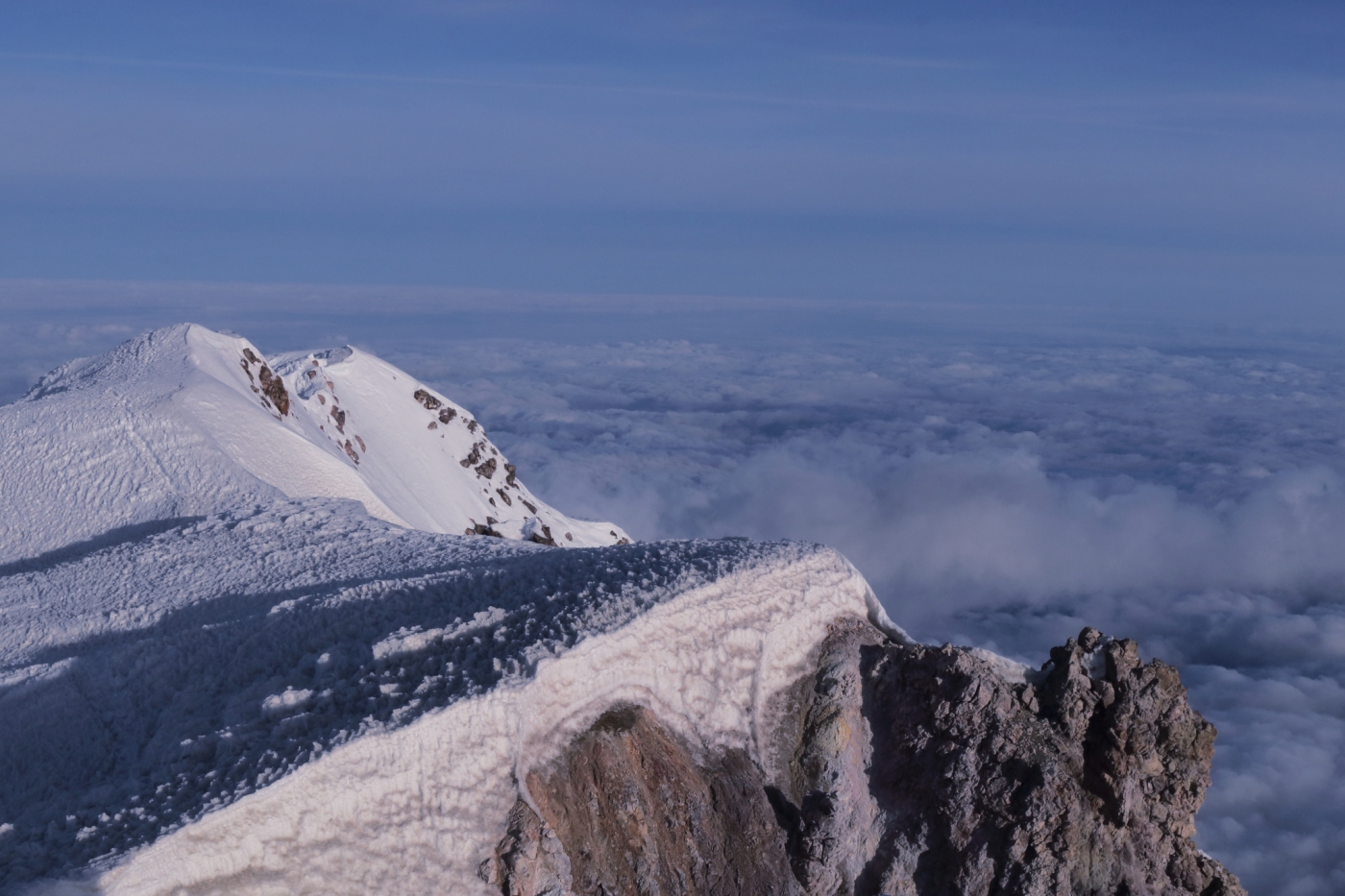 Location:  Oregon, Mount Hood
Distance: 7 miles
Difficulty:  Strenuous, technical climbing required
Type: Out and back with one overnight
Season: The optimal climbing season for route is spring.  We utilized an exposed ridge shortly after the snow melted off it.

My friend Merissa organized this excellent camping variation of the standard Southside route on Mount Hood this spring.  I’ve climbed this route a few times, and this camping option was a much improved version of the usual single push alpine start from Timberline Lodge.   Its a great alternative and I will likely use it again in the future.  The basic rundown is a late afternoon climb along an exposed ridge east of the Palmer Glacier.  We would set up a high camp somewhere near the top of the Palmer ski run,  have dinner and get in a short nap before a summit attempt the following morning.  While this alternative means carrying up a heavier pack at the start and end, we could carry a lighter pack for the summit, and get a few hours of rest before true climbing begins.

We started our climb on a Saturday in late May, 2018.  We met up in Portland, and did a quick gear check before heading out to Timberline Lodge to start our climb.  After grabbing our permits, we were on the trail around 4:30pm.  With additional overnight  gear in our packs, we climbed slow,  but we only had a couple miles to our high camp and we had a nice dirt trail to follow along the ridge.  We enjoyed the excellent daylight views of the mountain on the way up, yet another great benefit to the camping option. 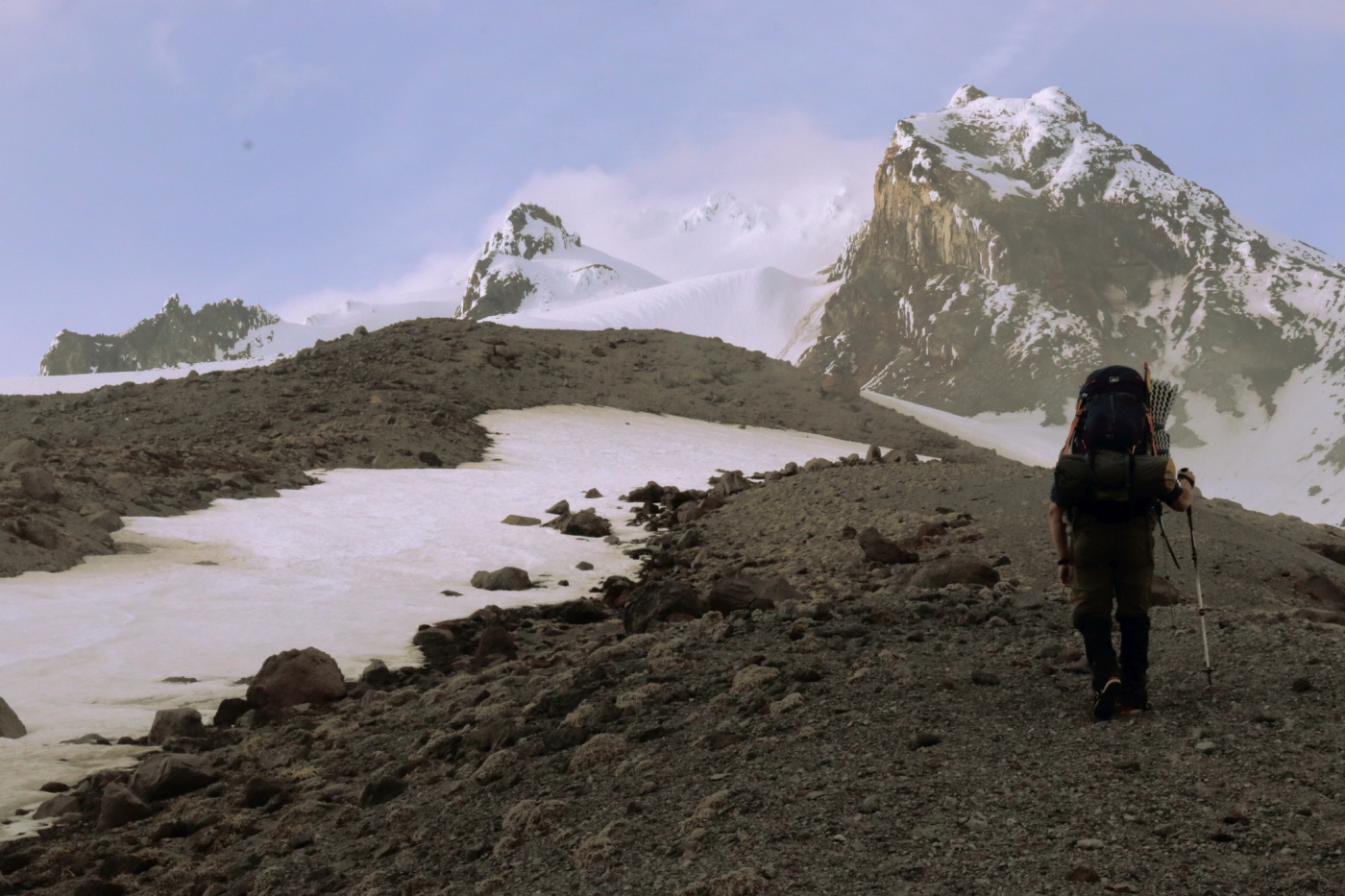 We made camp on a bivy site near the top of the Palmer ski run.  There was another group snow camping nearby, but we opted for a snow-free area for an easy setup.  Our site was great.  There were a few rock walls to block any wind, and the views were great.

The sunset as another great bonus from the camping option.  We were literally surrounded in aplenglow for a good hour.  It made dinner pretty magical.

Camping halfway up the mountain had yet another advantage of allowing  time to nap before the summit push.  On normal southside climbs the usual pre-climb coordination the day before makes it hard to get rest before all the hard work.  I usually find myself too keyed up to sleep during the day, and drive up to Timberline plus the longer summit approach on a normal climb limits your downtime in the evening.  With the camping option, after packing a heavy pack up to high camp in the afternoon, and eating a hot meal at camp, we were well primed for some sleep.  We set our alarms for 2 am and managed 4 to 5 hours of rest before the summit climb.

We were awake by 2 am, but gearing up and shoving food down our throats took longer than expected.  We were climbing again by 3 am.  We climbed by head lamp up the Triangle Moraine, arriving at Devils Kitchen around daybreak.  We used crampons for most of this climb, and had our helmet and ice axes out once past Devils Kitchen.  By 5:30 am we were on the Hogsback and heading up to the true technical portions of the climb.

From the Hogsback, we had two tricky sections to negotiate: the bergschrund, a large crevasse near the top the Hogsback; and the Pearly Gates, a narrow ice chute the would require a short pitch of technical ice climbing.

The burgschrund, was a fairly straight forward crossing around the climbers-right end of the crevasse.  This section was still on high angle snow, so it was slow going.  We were primarily using ice axes here for stability and self arrest precaution.  The crevasse was wide and deep where it was open, but the crossing itself was not difficult.

The second tricky section was through the Pearly Gates.  There were already parties coming down by the time we reached the gates, so we had to wait for a couple rope teams to make their careful descents through the Gates.  This whole section was fairly high angle and ice axes were used heavily for protection.

Once the other teams were through the Gates, we made our way up.  This section was a short ice climb requiring heavy use of crampons, ice axe and an ice tool.   We basically kicked or stabbed our implements into the ice with each step, keeping at least three points of contact in at all times.  The actual climbing was not super strenuous, but the significant fall potential always feels a bit nerve-wracking for me.

At their upper end, the Pearly Gates open out to the summit ridge, with a mellow pitch to the true summit.  At the top, we hugged each other, took a bunch of selfies, checked out all the surrounding Cascades, and ate our summit treats.  Yay!  Highest point in Oregon!

After our quick stay at the top, we were heading back down.  Down climbing the Pearly Gates feels way sketchier to me than going up, and it was not my favorite part.  I took this super slow, and held up a party waiting below a bit, but ultimately made it down safely without too much trouble.  Either way, I was very happy to get past the Gates.

After the Gates, there is still the high angle section above the burgschrund, and down climbing this takes ongoing attentive travel.  After the burgschrund, the Hogsback mellows out to a more comfortable angle, marking the return to more typical snow travel.

Hiking Back to Timberline

Hiking out of the Crater can be fairly rough after a long morning of climbing.  The Triangle Moraine was steep and long, and it wore out everyone’s legs.  Still the views of Crater Rock, the Steele Cliffs, and Illumination Rock were great under the full light of the morning sun, and the lingering exhilaration of a successful summit kept our spirits high.

We also had great views of Mount Jefferson, and faint views of the Sisters in the distance.

The rest of the hike back to camp, while not exceptionally short, was not long either.  We took a short break at camp, packed up our overnight gear, downed some electrolytes, and headed back to Timberline Lodge.  The remaining climb down to the Lodge was the usual slog, but Debbie and I walked the trail down the ridge and we felt like it was easier on the legs.  Merissa and Walls opted for the normal snow hike down the climbers trail.  We all got back to Timberline right around noon, and an hour later we were in Charlie’s Mountain View in Government Camp enjoying tasty burgers.

Overall this was an excellent way to climb Mount Hood.  The camping option had some very nice advantages over the typical single push Hood climb, and the added use of the exposed ridge also made good use of the dirt trail and reduced the extra gear needed for snow-camping.  Walls dubbed the ridge Best Known Method Ridge after some silly corporate terminology from his job at Intel, (technically I think the ridge is an upper section of Boy Scout Ridge, or the eastern flank of the Palmer Glacier area).  Either way, it was a great climb altogether, and probably my most favorite Mount Hood climb.

Summiting Mount Hood is a technical climb from all approaches, and there are significant risks involved, even for experienced climbers on “easier” routes.   Climbers should be trained in proper use of crampons and and ice axes and tools before attempting a summit.  Weather and snow conditions can change very quickly on the mountain and pose serious hazards.  People die on the mountain every year, so safety should be one’s highest priority on any Hood climb.

SummitPost provides a lot of useful information on the various climbing routes up Mount Hood at the link below: