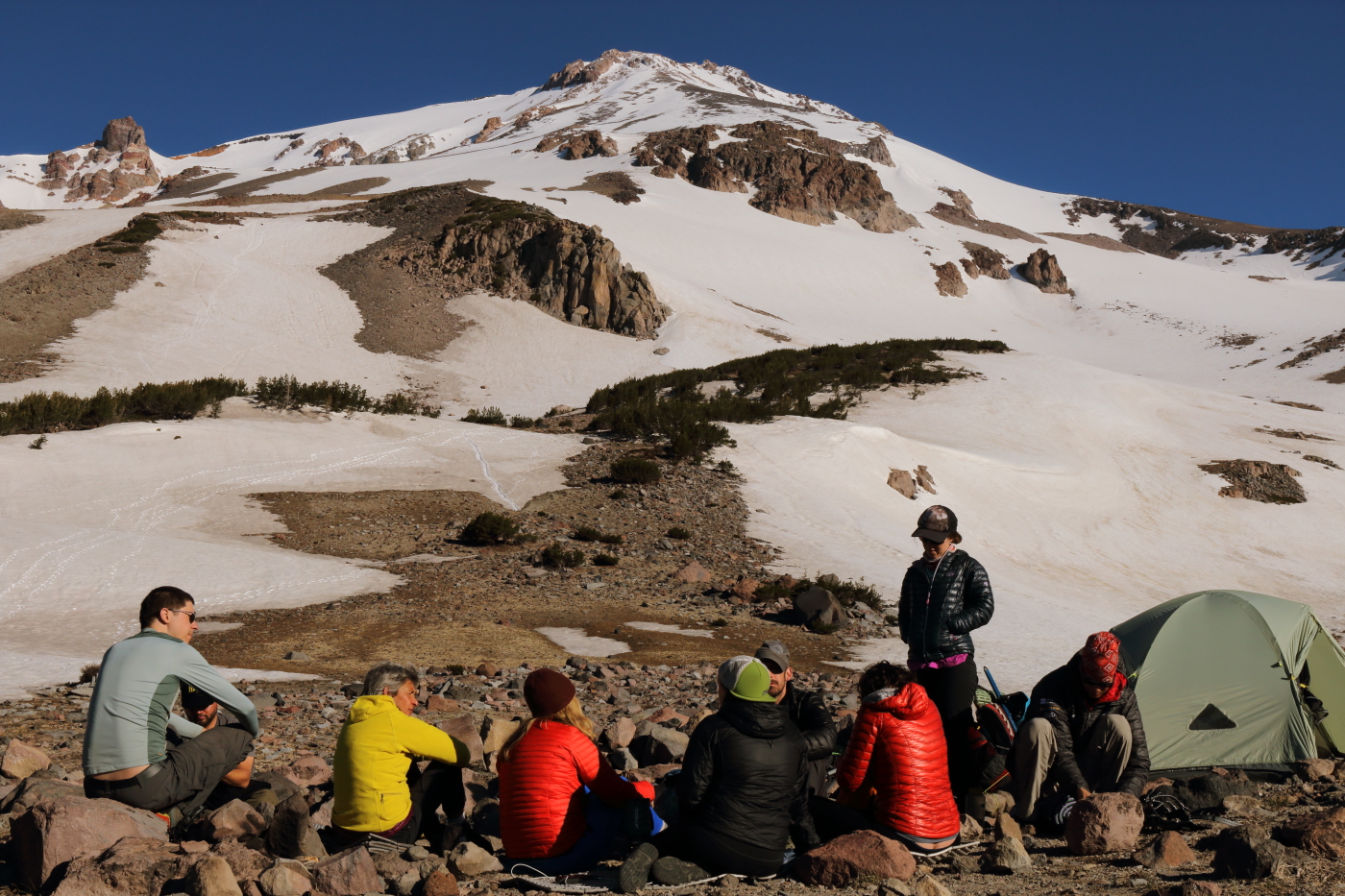 Location:  California, Mount Shasta Wilderness
Distance & Gain: 11 miles, 7,600 feet
Difficulty:  Strenuous, significant elevation gain, some technical climbing required
Type: Out and back climb with 3 overnights
Season: The optimal climbing season for route is spring and summer.
Description: A 4 day trip up Mount Shasta via the Clear Creek route.  We used 1 day for packing in, 1 day for acclimating at base camp, 1 day for the summit climb, and 1 day for packing out.

Some of my friends from the Mazamas and I did this awesome climb up Mount Shasta over the 2018 Memorial Day weekend. The climb itself was very challenging, but we utilized a great base camp and had a skilled climbing party.  We had high winds the first couple of days, but summit day was near perfect conditions and we had amazing views from the top. This trip also set a new elevation record for me, hitting 14,179 feet at the summit.

Base Camp and Acclimation Day

We started our climb on Saturday of Memorial Day weekend, 2018.  We had a group of 12, so we had a few cars making their way down from Portland that morning.  We met up in the little town of Mount Shasta for a quick lunch before heading up to the Clear Creek Trailhead by caravan.  We packed up in the parking lot, and filled out our self-serve permit tags and grabbed a weekends worth of shit kits at the kiosk.  By 3 PM we were on the trail to our base camp.

The Clear Creek route follows a shaded trail through trees for the first mile an a half or so, before breaking out to a partially open ridge above the Clear Creek canyon.  From there the trail ascends up the canyon rim to treeline.  We hit patchy snow along the way, which eventually gave way to rolling snowfields.  Near the top of the canyon, the trail crossed a wide open snowfield leading to a handful of campsites on the opposite side of the canyon.

We were the only party in the area, so we had our choice among all of the available sites.  We selected a large space with good wind cover, and a nice stream for water nearby.  Elevation was right around 9,000 feet, so it was a decent place for a day of acclimation.  Our arrival at camp was around 6 PM.

We set up our tents, collected water, and made dinner.  Sunset that evening was pretty, with the snowy peaks of Mount Lassen National Park glowing in the distance.  As soon as the sun was down though, the winds picked up and blew through the night.  I slept well in my bivy, but a few of my friends were kept awake by their tents flapping around in the wind.

The wind continued through Sunday, so we spent most of the day hanging out behind the protection of a clump of trees.  This was our acclimation day, so we spent our time chilling in our wind shelter, resting up for climb day, talking about summer plans, taking naps, and making silly videos about Shasta Cola.  I did some exploring around camp early in the day, checking out the Mud Creek canyon to the west, and taking some photos of the nearby rock formations.

We made dinner in our tree shelter later that evening and briefed on the next day’s climb.  Walls and I had a few bars of cell service and were able to check the National Weather Service forecasts.  The wind was supposed to die down in the morning, and clear conditions were predicted.  Weather looked good.  We discussed a few safety precautions as a group, did a gear rundown, went over our route plan, laid out a turnaround schedule, set up some buddy system groups, and assessed food and liquid needs.  Then after another pretty sunset, everyone was in bed for the night.

Our summit bid started with our 2 AM alarms going off on Monday morning.  It took us about an hour to get dressed, eat some breakfast, and gear up, so around 3 AM we were heading out.  We had 1 climber opt to sleep in, so we had 11 climbers leaving camp in the morning.  We climbed by headlamp up a series of rocky use trails and open snow fields, switching between crampons and boot tread where needed.  The sky began to lighten up around 5:30 AM.

The snowfields were, by far, the longest section of the climb day.  With breaks, it took us about 7 hours to ascend this portion of the climb.  Around 10:30, we began to top out near the toe of a rocky outcropping near the summit.  The elevation here was about 13,000 feet.  From here we would veer to climbers-right, contouring around the bottom of the outcropping.

By this point we had lost a few climbers.  Guru and Lamb turned around early, then Lehman and Hong called it somewhere around 10,500 feet.  We were down to 7 climbers at the top of the snowfields.

Skirting the toe of the rocky outcrop turned out to be fairly dicey in places.  We wore helmets through this section and used ice axes to protect against any falls.

An hour later we had made it over to of the Wintun Glacier, where we could ascend straight up again.  The glacier was very steep though, and after already climbing for eight hours, this section felt brutal.  The elevation was seriously starting to kick in as well, and I was out of breath with every few steps.  I think this was the hardest section for everyone.

Annoyingly, the top of the Wintun Glacier opens out to an imposing view of a looming summit block.  After an exhausting climb up the glacier, the block looked nearly unclimbable.  We were tired and fighting the altitude pretty heavily, so this somewhat unexpected final push was demoralizing.   3 climbers decided to call it a day.  The remaining 4, Walls, Winter, Dwelle and myself, hesitantly pushed on.

Magically, the far side of the summit block had a straightforward trail to top.  The climb was still a little rough under the thin air of 14,000 feet, but it was mostly non-technical and safe.  Arriving at the top after an exhausting morning was invigorating.  We hugged each other and took a lot of pictures.  Summit time was around 1 PM.

We hung out at the top for about 30 minutes.  On our side of the mountain, we saw only one pair of skiers that morning, but there were lots and lots of climbers at the summit who had ascended the more popular Avalanche Gulch route to the west.  It was a little like running across civilization on top of the mountain.  Lots of people everywhere.

Soon we were on our way back down.  The snow on the Wintun Glacier was soft enough to plunge step, and we made good time descending this section.  We actually caught back up to the 3 climbers who turned around near the top.

The remainder of the descent went smoothly, plunge stepping some more through the long stretch of snowfields above camp, and using the use trails down the patches of open rock.

We made it back to camp around 5:30 PM, legs tired and tummies hungry.  We made dinner, burned some sage to mark a successful climb, watched one more magical sunset, and then everyone passed out.

Our last morning at camp was leisurely.  We ate a nice breakfast together, and shared our highs and lows from summit day.  The climb was a challenge for all of us, but I think it left everyone feeling overall energized and in good spirits.   After packing up our things, were were on the trail at 9 AM.

Our hike down was pleasant, if not slightly uneventful.  We made it back to the cars around 10:30 AM.  We grabbed some coffee together in the town of Mount Shasta and filled up water bottles at Big Spring.  Everyone else was heading back to Portland from there, while I was heading down-state to visit some friends and family in Davis.

Overall, this was an awesome climb, and it remained on my mind for many days thereafter.   The gain from camp to summit was over 5,000 feet and punishing at the higher elevations, but the views were amazing and climbing with a good set of capable mountaineers was great.

Big shout outs to my whole climbing crew, by the way. You guys are amazing!

I did this climb with a number of friends from the Mazamas, or more specifically, a trained set of mountaineers who love their trip planning.  Fortunately for us, this trip required lots of planning.

We organized mostly by email, but we had a couple meetings in town to work out details in person.  Everyone took on roles in the planning process.  Dwelle, Lehman and D-Money provided research on the various routes, Hagert researched permitting and regulations, Lamb prepared Caltopo mapping and printouts for everyone, Petsche set up gear and carpooling spreadsheets and prepared a loose prospectus on a Google Drive account, and Walls and I provided weather reports.  Overall, it was great to have an efficient planning team, but I think we were motivated by the potential of this awesome mountain.  Either way, I like having a crew with good trip planning and coordination skills.

Climbing Mount Shasta is a fairly substantial undertaking.  The climb typically takes at least one overnight at a high camp.  While some people classify a few of the routes as non-technical, there are plenty of hazards on the mountain to be aware of.  There is high angle snow in many places and the weather can change dramatically in short periods.  I felt comfortable having crampons, an ice axe and helmet with me, and I would recommend bringing this items for anyone considering a Shasta climb.  Climbers should also be well conditioned for long, steep ascents at high altitudes.  Some of the pitches were fairly strenuous near the top and took a lot of endurance.  Be in good shape before you do this climb.

SummitPost has a detailed description of the Clear Creek route located at the link below:

The Mount Shasta Wilderness is managed by the National Forest Service, who also provides official information at the link below: