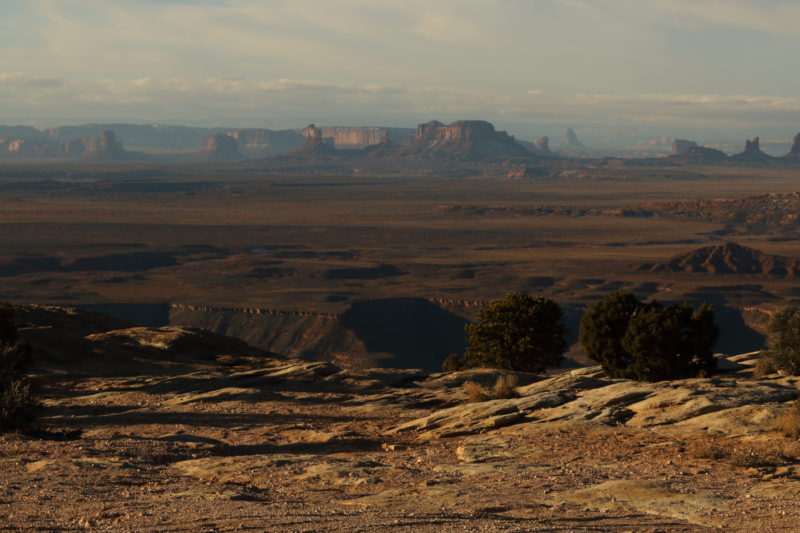 Of all the places I camped during my trip through the American Southwest, Muley Point was probably my most favorite.  It included an awesome drive up Moki Dugway, a long set of switchbacks carved into the towering cliffs of Cedar Mesa, and Muley Point itself was an amazing overlook, with views over a mind-blowing desert landscape.  I spent one night here, sleeping out on the rocks under the stars, a simple affair, just a dinner, a sunset, and a pretty view, but it was also one of those near perfect evenings that I will remember with great fondness for many years.

I began my day in the tiny town of Mexican Hat, Utah, named for the precariously balanced, sombrero shaped rock that sits on the outskirts of town.  Not far from the rock, I found my turnoff to Muley Point, State Road 261, pointing off toward Moki Dugway.

I followed the road for while, watching the monolith of Cedar Mesa rise up over the horizon.  From the road this giant mass of rock looked impenetrable, its near vertical walls towering some 1,200 feet above the valley floor.  Incredibly, a long set of switchbacks, known as Moki Dugway, ascends the mesa wall, allowing access up the mesa face and on to Muley Point and the scrubland beyond.

Moki Dugway is unpaved and lacks any semblance of guardrails, but aside from a few potholes, it was easy enough maneuver my van up, with enough space for other vehicles to pass, and no real hazards along the way (aside from the cliffs at the side of the road).  I could see the dirt surface being a little problematic in the rain, but I had no problems otherwise.

The views from Moki Dugway were really impressive, and worth the trip all on their own.  I could see four states from here, (Utah, Colorado, New Mexico, and Arizona), and the surrounding desert, in my opinion, was some of the best in the Southwest.   I couldn’t resist stopping for pics.  What a spot!

The turnoff for Muley Point is right at the top of Moki Dugway, and from there it was a 5 mile dirt road to the point. This road could also be problematic in wet weather, but I was able to make it out to the point just fine, even with a few small patches of mud from the snows earlier in the year.

Aside from the road, Muley Point is completely undeveloped, with just a handful of informal turnouts leftover from previous travelers.  I parked my van at a site near the cliffs and set up for dinner (reheated rice and beans).

Of all the places I camped over the course of my trip, this was probably my all time favorite.  For one, it was free, (no facilities, but no pay stations either).  Two, I had the place all to myself.  Yes, I was travelling during the off-season, but Muley Point is not well known, and nobody else was there that Saturday evening.  And three, the view was jaw dropping. Goosenecks State Park sat at the foot of the cliffs with deep canyons twisting off in all directions, and Monument Valley sat off in the distance, its giant mesas on eternal watch over the surrounding desert.  I had a beautiful sunset that afternoon, and I took a million pictures as the light changed across the desert over the course of the evening.

I slept on the rocks that night, watching the stars pan across the sky, and listening to wind blowing through the Creosote brush around my camp.  Sometimes the universe just pulls out all the stops, hinting without words, the meaning of our place here on earth.  My night at Muley Point was one of those nights.  A magical night indeed.

Please note:  While Muley Point is one of the most stunning overlooks near Four Corners, it is a highly sensitive area and is in danger of overuse.  Please avoid disruptive activities like littering, loud music, off-road travel, or other damaging uses.  Pack out all trash, even if somebody else left it.  As of this publication, the National Park Service does not charge fees to use Muley Point.  This could easily change, however, if the land is not taken care of.

Additional information on Moki Dugway can be found on the Business Owners of Bluff website: