Drove down the Oregon Coast early this week, down Highway 101 from Florence, Oregon to the California border.  This section of coast has a long string of beaches, scenic corridors, parks, wildlife areas, viewpoints and many other recreation areas.  My favorite spots were the Oregon Dunes, Sunset Bay, Cape Blanco, and the S.H. Boardman Corridor, but the whole drive was beautiful.

I drove out from Eugene on Highway 126 late Saturday afternoon to find a place to camp.  Slept in the woods outside of the Oregon Dunes.

Did a 3 mile day hike on Sunday morning in the Oregon Dunes Day Use Area, south of Dunes City.  The hike went through the dunes and back up the beach.  There were a few people out, but I mostly had the beach to myself.  Just me and the waves.

Stopped along a short stretch of road in Sunset Bay State Park, outside of Coos Bay later that Sunday.  This was a popular area, with a beach and a few viewpoints, and a nice place to spend the afternoon.  I saw lots of wildlife from a couple of the view points, including huge packs of sea lions and pods of whales.

Pulled into Bandon late Sunday afternoon. The sky was smoky from a distant wildfire, and the sunset was extra red. The view from the beach was really spectacular, and everyone in town was out on the bluffs watching the display.  It was a beautiful sight and amazing evening.  Camped near the marsh that night, on the outskirts of town.

Woke early on Monday, and took photographs out on Cape Blanco.  The sea was calm, and it was a beautiful morning.  Some of the smoke had set into the air, and there were lots of pinks and blues in the landscapes and water.  Again, I had the place to myself, just me and the waves. 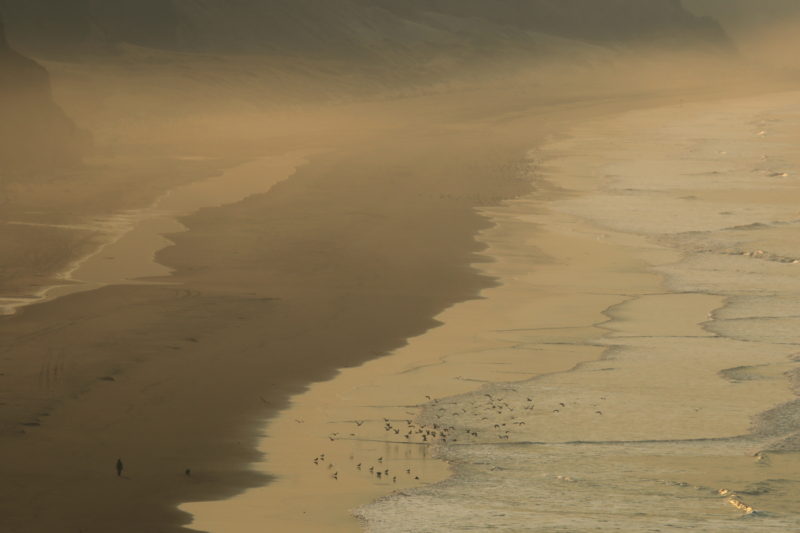 I really enjoyed Cape Blanco, particularly the area near the Cape Blanco Lighthouse.  The morning was good time to be there, when the beaches were quiet and there was good light.  There are many nice places along the Southern Oregon Coast, but I think this one was one of my favorites.

Drove down to the Samuel H. Boardman State Scenic Corridor Monday afternoon and hiked the Thunder Rock Overlook Loop.  This was a great, albeit short loop, with lots of great spots to explore, take pictures or enjoy lunch.  You can go all the way down to a beach as well.

I camped up Pistol Creek in the National Forest Monday night and drove back down to the S. H. Boardman area Tuesday morning.  There were very few people out again and I took my time checking out the Thunder Rock and Natural Bridges areas.  There are great spots around Natural Bridges for some adventurous exploring, but be careful, the cliffs can be treacherous!

Drove down to Cape Ferrelo  later in the moring and did a short loop over the headlands, before heading down to Brookings to fill up the the gas tank and buy groceries.  From here I would drive down into California to tour the Northern California Coast.

I really liked the Southern Oregon Coast.  It is an excellent drive, with tons of parks and beaches.  There are lots of campgrounds along Highway 101, but many excellent options for boondocking or dispersed camping.  It was also great traveling through here in the off-season as well.  The Oregon Coast can be a little dreary in the winters, but I still had lots of sun during this October trip, and there were plenty of fall colors making this pretty.  Overall, this is a great area, and worth checking out.