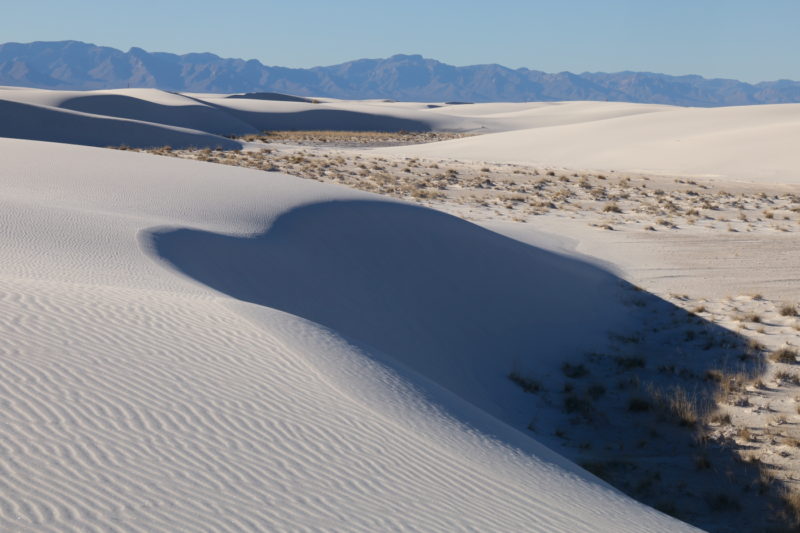 Deborah and I had to do a little rescheduling in January while the federal government was shutdown.  She had flown down to El Paso to spend 10 days with me in Texas and New Mexico.  Among other things on our itinerary were Carlsbad Caverns, the Gila Cliff Dwellings, and White Sands, all of which closed during the shutdown.  We detoured out to Big Bend and Guadalupe, which were still partially open, and things ended up working out alright, but then on her second to last day the government reopened.  Happy to have all the amenities of the National Park System again, we went into White Sands, spending a full afternoon rambling around the dunefield in the park, and checking out an interpretive hike at sunset. Yay!

The dunefield is the main attraction in White Sands, a sprawling expanse of pure white sand dunes.  You can drive into the dunes, and either walk the marked trails, or roam around the dunes freely.  We went for that latter, kicking off our shoes to ramble around on our own.

The sand dunes are very cool.  The white sands come from tiny gypsum crystals that form in surrounding salt flats.  The wind blows these crystals across the valley where they have slowly formed into drifts and dunes over thousands of years.  Today the dune field covers over 250 square miles. That’s a lot of gypsum crystals, right?

White Sands is an excellent place for photography, with has an ever-changing palette of pretty colors.  The mild New Mexican climate makes for plenty of sunny days, with with blue skies and fluffy white clouds to match the dunes.  Later in the day, the southwestern sunsets light up the sand in with pretty reds and oranges.  Its a photographer’s playground!

That evening Deborah and I did the Sunset Stroll, an interpretive hike led by a park ranger.  We learned about the formation of the dunes, and the delicate mix of climate and geology that produced the gypsum sand.  We also learned about how various plants and animals have adapted to the dry, alkali environment in the dunes.  It was informative and filled in a lot of the details about the monument.  At the end of the hike, we watched the sunset from the the top of a dune with the ranger and the other members of the tour.  It was fun, and Deborah and I enjoyed learning all about the desert.

White Sands was a great park, and it was super nice to have amenities back in the parks again, particularly interpretive elements like the Sunset Stroll.  While the government was down, some places were still partially open, but all of the Visitor Centers were closed, and the park rangers were all on furlough.  We were still able to get into the partially opened places, like Big Bend, but we missed all the informational tidbits describing how the mountains formed and what animals lived in the surrounding desert.  Given that, it was nice to see the park service back in business in White Sands, doing the job it was meant to do—helping  people share and appreciate this great land that is America. We love you National Park Service!